The Graduate School Field Committee (GSFC) in Film Studies is a cooperative effort by film faculty across the College of Arts and Humanities to promote the study of cinema at the University of Maryland. 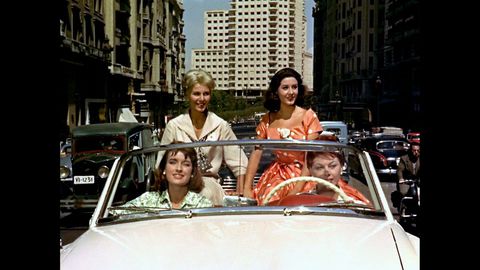 The GSFC supports student research through its Graduate Colloquium in Cinema and Theory each spring and film-related events such as symposia, screenings, and seminars throughout each year. GSFC faculty are also available to advise graduate students on their research in Film Studies. Members of the GSFC in Film Studies include faculty from the School of Arts and Humanities and other campus institutions. Departments represented include the School of Languages, Literature and Culture (SLLC), English, History, Comparative Literature (CMLT), Art History, American Studies, Classics, Ethnomusicology, and the Non-Print Media Services Library.

About the Graduate School Field Committee in Film Studies

The Graduate School Field Committee (GSFC) in Film Studies has been formed in response to student demand for academic support and official recognition of their interest in the field. The Committee brings scholarly and curricular coordination to the University's treatment of the most important art and entertainment medium developed in the twentieth century. It also gives coherence and synergy to the substantial existing faculty commitment and library resources in the field. Faculty expertise in Film Studies has been drawn together from various units of the College of Arts and Humanities.

GSFC in Film Studies formalizes the numerous links established by University of Maryland scholars with local organizations and institutions dedicated to the promotion, distribution, and preservation of film. Film studies faculty have also developed strong links with their counterparts holding similar positions in graduate programs throughout the country and in the world (Freie Universität Berlin, Tokyo University, King’s College, University of Otago, University of Buenos Aires, University of Toronto, etc.). They will encourage students to establish contact with international institutions and present their own research in specialized conferences listed by the Society for Cinema and Media Studies.

The curriculum focuses on advanced research in the theory and history of cinema, while emphasizing the development of methods and skills of critical analysis. Particular attention is given to the interaction of film with literature, art, photography, and language. Students are encouraged to address complex issues such as trans-nationality, social context, and cultural, racial and gender identity in relation to film as well as the place of cinema in popular culture.

Participating students must complete the MA or PhD degree requirements of their respective departments' programs while taking as many courses as possible from the Film Studies Curriculum. This coursework includes the one-credit Graduate Colloquium in Cinema and Theory, which students are strongly encouraged to attend. The final decision on course selection is reached in coordination with the student, his/her advisor and the respective department's graduate director.

Graduate students and postdoctoral fellows at the University of Maryland who have research interests in the study of film are encouraged to apply to be affiliates of the GSFC in Film Studies.
The benefits of affiliate status include:

Affiliates will be expected to attend field committee events, report at the end of each year on their activities and provide us with up to date information about themselves and their research for the website. Additionally, all students participating in the GSFC are encouraged to attend the one-credit Graduate Colloquium in Film Studies held each spring.

To apply, send a letter of request, accompanied by a letter of support from your primary research mentor to:

Please include your full name, program/status, department, email address and your advisor’s name.

While most graduate courses in film studies are offered in individual departments, the Graduate School Field Committee (GSFC) in Film Studies oversees the one-credit Graduate Colloquium on Cinema and Theory each spring. All students participating in the GSFC are encouraged to attend this course. The course meets for four sessions throughout the semester, with a professor from a different department leading each session. This is an excellent opportunity for students from various departments to interact with each other and gain new perspectives on the study of cinema.

There are a number of graduate programs that offer courses and training in film studies. Prospective students should apply to the program that most closely matches their research interests and training goals. A good place to begin is to follow the links provided below. Students within these programs have access to the activities and resources of the GSFC in Film Studies.

The courses listed below have been identified by the GSFC faculty as providing foundational training in film studies across disciplines. In principle, these courses are open to any graduate student affiliated with the GSFC. Additional information is available in the Graduate Catalog as well as on Testudo and Department Websites.