Arts and humanities research represents a range of disciplines and distinctive modes of knowledge and methods that result in articles and books, ideas, exhibitions, performances, artifacts, and more. This deliberate and dedicated work generates deep insights into the multi-faceted people and cultures of the world past and present.

The Joseph and Alma Gildenhorn Institute for Israel Studies

Rightfully Hers: American Women and the Vote exhibit

Robyn Muncy guest curates exhibit at the National Archives to commemorate the centenary of the ratification of the Nineteenth Amendment.

Robyn Muncy, professor of history, is a guest curator of "Rightfully Hers: American Women and the Vote," an exhibit to commemorate the centenary of the ratification of the Nineteenth Amendment at the National Archives in Washington, DC. The exhibit opened in March and will run through September 2020.

The exhibition is part of a nationwide initiative exploring the generations-long fight for universal woman suffrage. Despite decades of marches, petitions, and public debate to enshrine a woman’s right to vote in the Constitution, the 19th Amendment – while an enormous milestone – did not grant voting rights for all. The challenges of its passage reverberate to the ongoing fight for gender equity today.

What is now considered a key component of citizenship - the right to vote - is often taken for granted, and is not afforded to all through the Constitution. Through this initiative, the National Archives will not only highlight the hard-won victories that stemmed from the Women’s Suffrage movement, but also remind modern-day citizens of their responsibilities associated with the right to vote.

Read more about the exhibition on the National Archives website.

Existing research has affirmed that Black people historically mastered oral communication strategies to resist subjugation and oppression by dominant groups, and have emerged as leaders in technological innovation. This article takes seriously Black users’ social media engagement and focuses particularly on Black joy online. We analyze a rich collection of discourse spanning both Twitter and Vine through which Black users utilize the affordances of both platforms to challenge dominant narratives that demean and dehumanize Black people. We argue that Black users seize upon the interplay of the applications to not only express and foster joy, but to extend historic legacies of Black oral culture and further cultivate contemporary strategies that leverage – but also transcend – the affordances of each platform.

American Studies, Maryland Institute for Technology in the Humanities

Project Description: A daylong digitization event, by-appointment collecting visits to neighbors’ homes, and a public interpretation event to document and explore the history of Lakeland, an African-American community in Prince George’s County, Maryland.

Image, Critique, Politics: Desistance and Polemics in the Caribbean: An Experimental Symposium

School of Languages, Literatures, and Cultures, Spanish and Portuguese 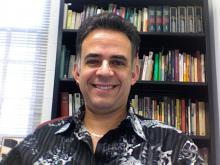 Juan Carlos Quintero-Herencia, professor Spanish and Portuguese in the School of Languages, Literatures, and Cultures, received a grant from the Latin American Studies Association (LASA) to host an symposium at the University of Maryland in Spring 2019 on Spanish Caribbean literature and culture.

This proposal describes the design and organization of an experimental symposium focused on the critical reconsideration of periods, situations and texts that have been polemics in the modern and contemporaneous Spanish Caribbean. It is, in addition, an intriguing proposal for its promise to combine esthetics and policy, literary critique and analysis of the current political, economic and environmental uncertainties that confront the societies of the Caribbean.

In Latin America, the Caribbean occupies a secondary or inferior position, and is often overlooked.  This project makes a significant effort to increase the academic visibility of this region, therefore it obtained a high score in the evaluation of the potential of its impact criteria.

The organizers and participants in the symposium, who come from different countries in the Hispanic Caribbean and other countries, show an excellent transnational and hemispheric commitment that includes the United States, Canada, Europe and Latin America, and seek to be involved in the proposed discussion and to supply texts to established and emerging academics, from a great variety of institutions. In summary, it is an original project, it is very well developed and is clear in its proposals, objectives and use of the budget.

The project selection committee in this cycle was presided over by Mara Viveros-Vigoya, Universidad Nacional de Colombia, Vice President of LASA and President-elect, and included the participation of María Victoria Murillo de Columbia University; Emiliana Cruz, from Ciesas, México DF, Vivian Andrea Martínez-Díaz, Universidad de los Andes and Jaime A. Alves of CSI/CUNY and Universidad ICESI/Colombia, former winner of the FORD-LASA grant in 2015.

New book by Carly S. Woods highlights the crucial role debating organizations played as women sought to access the fruits of higher education in the U.S. and U.K.

Spanning a historical period that begins with women’s exclusion from university debates and continues through their participation in coeducational intercollegiate competitions, "Debating Women" highlights the crucial role that debating organizations played as women sought to access the fruits of higher education in the United States and United Kingdom. Despite various obstacles, women transformed forests, parlors, dining rooms, ocean liners, classrooms, auditoriums, and prisons into vibrant spaces for ritual argument. There, they not only learned to speak eloquently and argue persuasively but also used debate to establish a legacy, explore difference, engage in intercultural encounter, and articulate themselves as citizens. These debaters engaged with the issues of the day, often performing, questioning, and occasionally refining norms of gender, race, class, and nation. In tracing their involvement in an activity at the heart of civic culture, Woods demonstrates that debating women have much to teach us about the ongoing potential for debate to move arguments, ideas, and people to new spaces.

An interdisciplinary research team is exploring the relationship between arts education and college student outcomes.

Project Activities: The research team will examine the academic achievement outcomes for students who chose to enroll in arts courses compared to those who did not for ten cohorts of American students who pursued courses from the International Baccalaureate (IB) Diploma Program, using data provided by the International Baccalaureate Organization. Additionally, they will link IB data to data from the National Student Clearinghouse (NSC) to compare postsecondary outcomes for arts and non-arts IB students. Finally, they will see if their findings from the IB dataset replicate using data from the Maryland Longitudinal Data System (MLDS) Center for students in the public high schools of Maryland.

Products: The research team will produce preliminary evidence of the potential for arts education to improve high school and postsecondary academic outcomes. In addition, they will produce peer-reviewed publications in arts education and general education research journals, host in-service workshops for arts educators; participate in annual meetings for arts educators and policymakers; publish articles in education practitioner journals and magazines; publish blog posts and op-ed articles on platforms intended to reach the general public; and communicate about these products through various social media platforms. 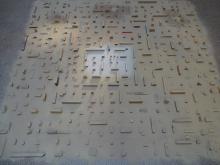 After a two month residence at the Arkad à Auvillar Art Center in Auvillar, France, Professor of Art Foon Sham created works on paper and site-specific sculptures for this exhibition using wood from south west of France.

School of Languages, Literatures, and Cultures, Spanish and Portuguese

Laura Demaría, professor of Spanish, has published her first novel.

By Ruth Enid Zambrana, professor and interim chair of women’s studies, director of the Consortium on Race, Gender, and Ethnicity

"Toxic Ivory Towers," seeks to document the professional work experiences of underrepresented minority (URM) faculty in U.S. higher education, and simultaneously address the social and economic inequalities in their life course trajectory. Ruth Enid Zambrana finds that despite the changing demographics of the nation, the percentages of Black and Hispanic faculty have increased only slightly, while the percentages obtaining tenure and earning promotion to full professor have remained relatively stagnant. Toxic Ivory Towers is the first book to take a look at the institutional factors impacting the ability of URM faculty to be successful at their jobs, and to flourish in academia. The book captures not only how various dimensions of identity inequality are expressed in the academy and how these social statuses influence the health and well-being of URM faculty, but also how institutional policies and practices can be used to transform the culture of an institution to increase rates of retention and promotion so URM faculty can thrive.