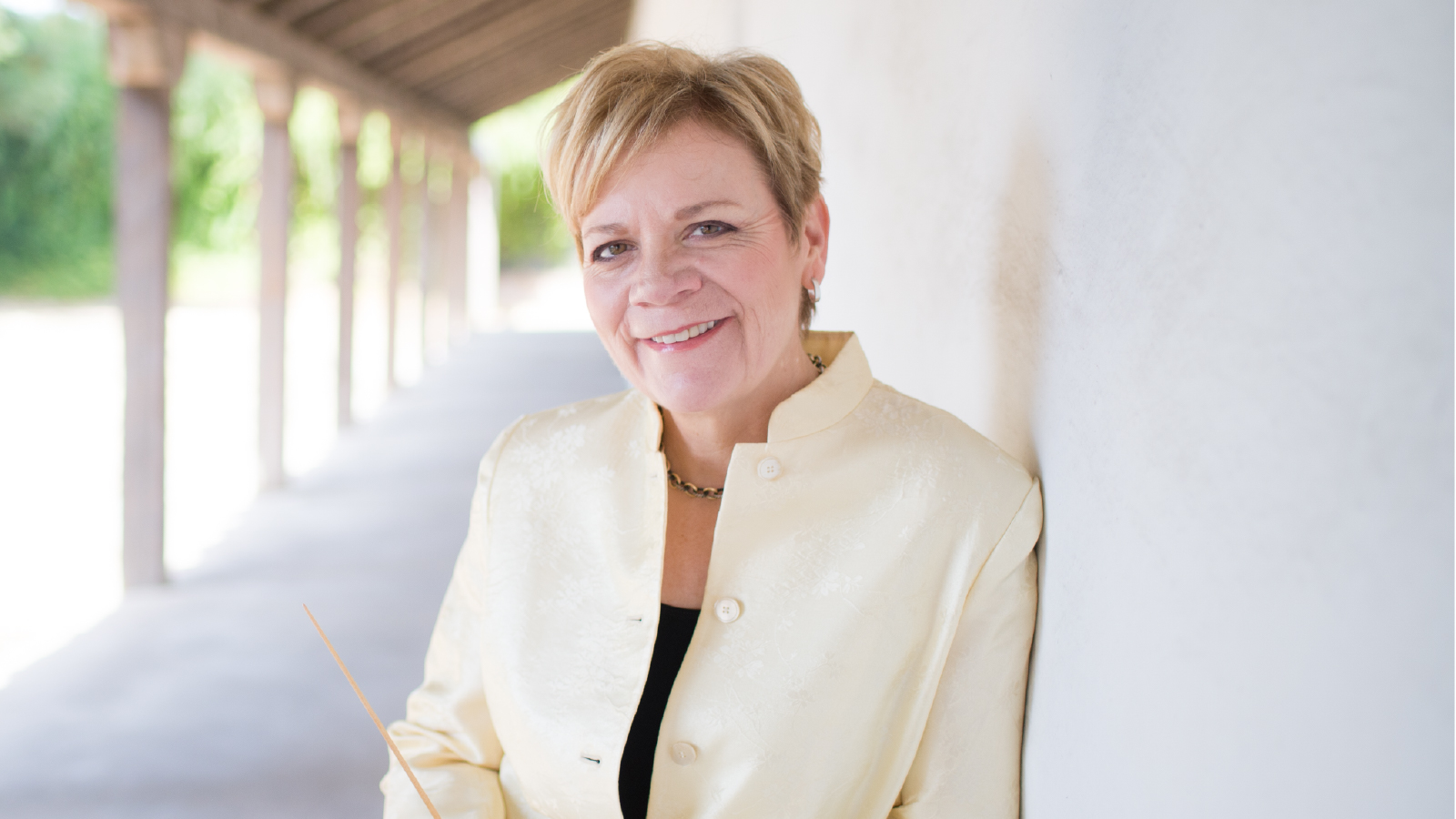 The National Orchestral Institute + Festival (NOI+F), a program of the University of Maryland’s Clarice Smith Performing Arts Center, today announces the appointment of renowned conductor Marin Alsop as its first-ever music director. Alsop will lead a newly formed conductor academy and conduct multiple concerts each June with the NOI+F Philharmonic. Recognized internationally for her innovative approach to programming, she will enliven the classics and spotlight new American and contemporary composers, focusing on women as well as Black, Indigenous and people of color. One of the nation’s leading summer festivals, NOI+F brings together emerging orchestral musicians from across the country for a month of music-making and professional exploration.

Alsop has a history of supporting the 34-year-old festival, serving as guest conductor each season from 1993-2000. 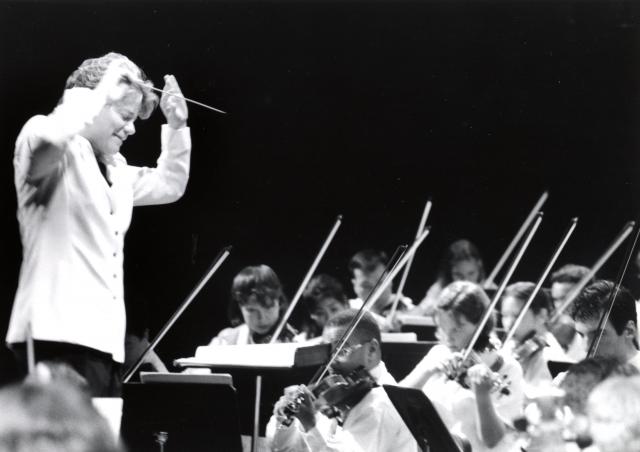 “I’m absolutely thrilled to join NOI+F in this new role. I deeply value the opportunity to work with these brilliant young musicians to share the joy of music-making and create a vibrant future for orchestras,” said Alsop.

Alsop made history as the first woman to head a major American orchestra as music director of the Baltimore Symphony Orchestra. In Baltimore, she continued her life-long commitment to education and to demystifying orchestral music—both central to NOI+F’s mission. Alsop launched OrchKids music program to serve Baltimore’s youth, founded the Taki Alsop fellowship to support women conductors and is also the director of graduate conducting at the Johns Hopkins Peabody Institute.

“As part of a major research university, we have a deep commitment to training and mentoring the next generation of orchestral musicians. We are delighted that Marin will be able to share her expertise and extraordinary talents with NOI+F participants. She is a visionary and a role model,” said Richard Scerbo, director of NOI+F.

Launching in June 2021, the NOI+F conducting academy will give six emerging conductors the opportunity to attend seminars and classes under Alsop’s tutelage.

Classical music label Naxos will document Alsop’s time with NOI+F in the summer of 2021. Naxos will record rehearsals, performances and interviews and, using this source material, produce three documentaries that will offer audiences an in-depth, behind-the-scenes look at the creative process.

In 2015, NOI+F began a partnership with Naxos to record one concert of all-American music each year—Naxos’ first partnership with a summer festival of its kind. The 2019 recording “Ruggles, Stucky, Harbison” received a Grammy nomination in the “Best Orchestral Performance” category.

Alsop has an extensive discography that has led to multiple Gramophone awards. She also made history as the first female conductor of the BBC’s Last Night of the Proms in 2013, and in 2019, she was awarded the Crystal Award from the World Economic Forum. She is the only conductor to receive the MacArthur Fellowship.

“Not only is Marin a phenomenal educator and conductor, but she brings a palpable enthusiasm and curiosity to everything she does,” said Erica Bondarev Rapach, acting executive director of The Clarice Smith Performing Arts Center.

One of the foremost conductors of our time, Marin Alsop is internationally recognized for her inspiring artistry, innovative programming, deep commitment to education and audience development, and powerful advocacy for the importance of music. The first woman to serve as the head of a major orchestra in the United States, South America, Austria and Britain, she currently serves as chief conductor of Austria’s ORF Vienna Radio Symphony Orchestra, conductor of honor of Brazil’s São Paulo Symphony Orchestra and the first chief conductor and curator of Chicago’s Ravinia Festival, where she curates and conducts the Chicago Symphony Orchestra at its annual summer residency. In her 14-year tenure as music director of the Baltimore Symphony Orchestra, she led the orchestra’s first European tour in 13 years, conducted more than two dozen world premieres and founded multiple change-making initiatives, including OrchKids, a music education program for the city’s most disadvantaged youth. She was music director of California’s Cabrillo Festival of Contemporary Music for 25 years and has long-standing relationships with the London Philharmonic and London Symphony Orchestras. She also regularly guest conducts such major international ensembles as the Cleveland Orchestra, Philadelphia Orchestra, Leipzig Gewandhaus Orchestra, Royal Concertgebouw Orchestra, Orchestre de Paris, Filarmonica della Scala and Orchestra of the Age of Enlightenment.

Alsop founded the Taki Alsop Fellowship, which promotes and nurtures the careers of emerging female conductors, and has launched a host of pioneering initiatives to broaden access to the classical world, often with special focus on underserved communities. These include multiple projects in collaboration with Carnegie Hall, including “All Together: A Global Ode to Joy;” a worldwide celebration of community to mark Beethoven’s 250th anniversary, this saw her reimagine the composer’s iconic Ninth Symphony for 21st-century audiences in partnership with ten orchestras at leading venues on six continents.

Recognized with multiple Gramophone Awards, Alsop’s extensive discography includes highly praised Naxos cycles of Brahms with the London Philharmonic, Dvořák with the Baltimore Symphony and Prokofiev with the São Paulo Symphony, as well as recordings for Decca, Harmonia Mundi and Sony Classical. The first and only conductor to receive a MacArthur Fellowship, she has also been honored with the World Economic Forum’s Crystal Award, which recognizes her championship of diversity in the classical world. Amongst many other awards and academic positions, she is director of graduate conducting at the Johns Hopkins Peabody Institute in Baltimore.

About the National Orchestral Institute + Festival

The National Orchestral Institute + Festival, a program of the University of Maryland’s Clarice Smith Performing Arts Center (The Clarice), trains aspiring orchestral musicians, composers, conductors and arts administrators from across the country in a month of dynamic music-making and professional exploration. Musicians are chosen through a rigorous, cross-country audition process. Every year, these young artists present passionate and awe-inspiring performances of adventuresome repertoire both at The Clarice and in the College Park, Maryland community.

Headshot of Marin Alsop by Adriana White. Image of Alsop conducting at NOI+F by Stan Barouh.