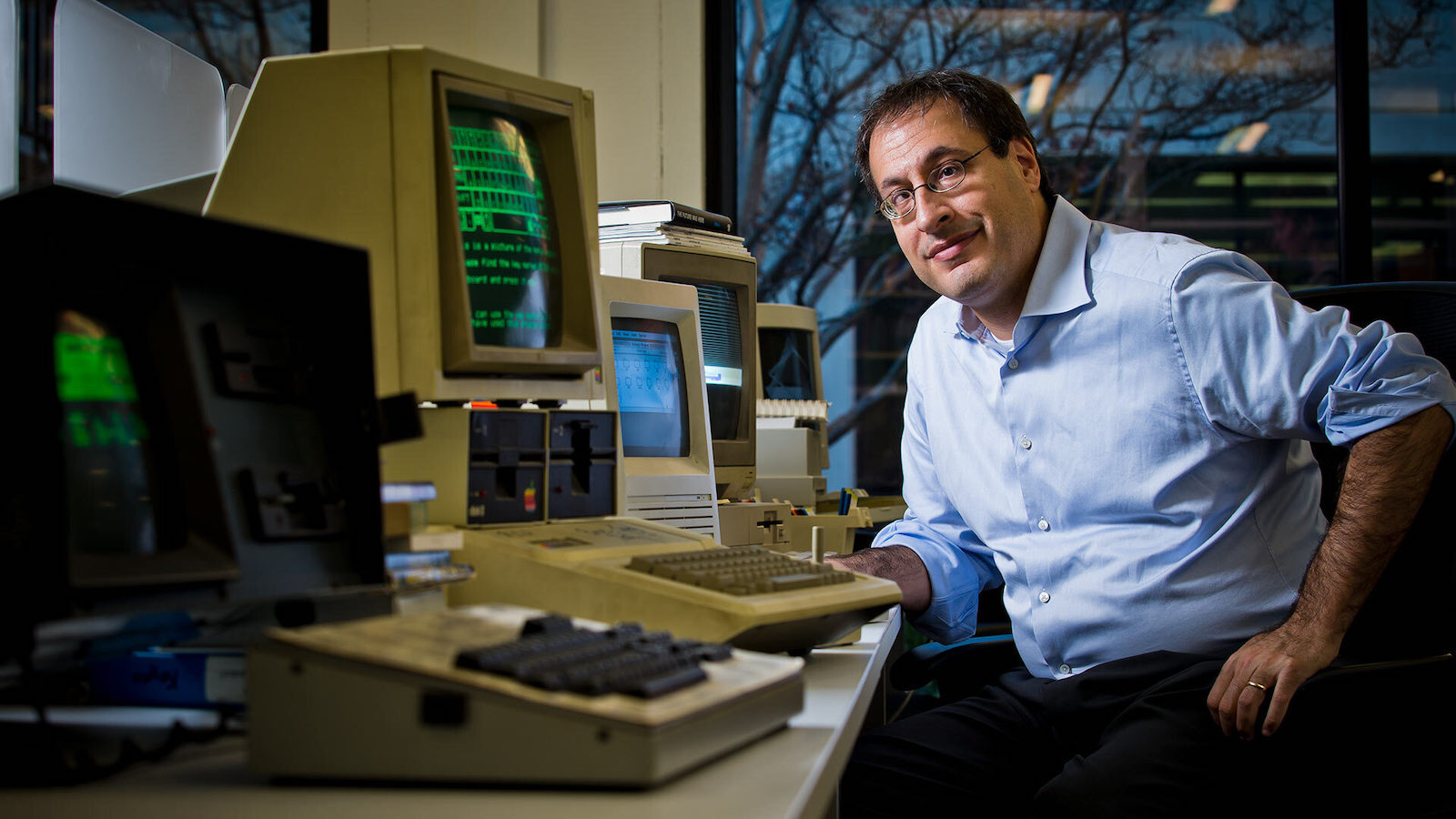 English professor’s new book explores how modern-day literature is made, preserved and studied.

The key to unlocking the secrets of a deceased poet’s writing process might not be found in their tattered spiral notebook or on the back of a restaurant napkin—not if they composed their works during the digital age. In that case, it might be buried in an obsolete Apple HyperCard file.

No one using an up-to-date Mac could hope to access the data, but if you’re Matthew Kirschenbaum, you simply dust off your decades-old Macintosh SE and let the literary sleuthing begin.

Kirschenbaum, a professor of English and digital studies at the University of Maryland, is a Sherlock Holmes in the burgeoning field that encompasses literature, the rise of digital media and how texts are written and revised. His new book, “Bitstreams: The Future of Digital Literary Heritage,” explores how the process of making literature has evolved, as well as the common threads that connect digital works to thousands of years of human creativity.

Kirschenbaum, an affiliated faculty member with the College of Information Studies at Maryland and a member of the teaching faculty at the University of Virginia’s Rare Book School, is also the co-founder and co-director of UMD’s BookLab, a makerspace, studio, library and press devoted to the codex book.

On Oct. 20, the English department will host a virtual book launch of “Bitstreams” featuring a discussion between Kirschenbaum and Professor of English and Director for the African American Digital Humanities initiative Marisa Parham. Ahead of the launch, we spoke with Kirschenbaum about how digital books are made and can be preserved.

Let’s start with the book’s title. What is a bitstream, and what does it have to do with literature?
That’s a word that originates in computing. A bitstream is a sequence or string of ones and zeroes—bits—that make up a digital object, like a file. Nowadays literary activity is also part of the bitstream; so, a writer writes a novel on their laptop, they email it to their editor, they and their editor go back and forth over email with track changes and then the book moves into production. All of this composition, revision, editing and layout is digital. It’s only at the very end of this process that the book stops being a bitstream and becomes a physical thing when it's finally printed.

How has this evolution impacted literary studies and literary research?
We’re all used to the idea of going to a library, an archive, seeing books and manuscripts and seeing where the author crossed out one word and wrote in a different word instead. We need to understand how to do that now in a world overtaken by bitstreams. How do we ensure that when the author sits down to write a novel on their laptop, those files on their hard drive are saved and eventually wind up at a place like the Folger Shakespeare Library where they can be cared for by archivists and curators, where they can be accessible 50 or 100 years later when someone like me comes along and wants to do literary research?

You tell the story of your work unearthing the poems of William Dickey as a sort of case study of how to do that detective work. Tell us about that process.
William Dickey, who was a recipient of the Yale Younger Poets Award, died at the height of the AIDS epidemic in San Francisco in the early 1990s. Before his death he was experimenting with digital poetry. As part of the research that went into the book, I was able to recover and publish online for the first time 14 of his digital poems that had never been seen before. I recovered them from the collections of the Maryland Institute for Technology in the Humanities here at UMD in the literary papers of a writer named Deena Larsen, who was a friend, collaborator and confidante of Dickey’s, and therefore had copies of his poems on her diskettes. His poems were written in Apple’s HyperCard software, which ceased distribution back in 2004. Fortunately, I have a Macintosh SE of my own that was able to run the original diskettes and view the poems and then migrate them to more modern media.

In “Bitstreams” you also describe accessing Toni Morrison’s floppy discs. What was that like?
Yes, I traveled to Princeton, where Toni Morrison taught for many years and where her papers are housed. Among her papers are four floppy discs from the 1980s, when she was writing the novel “Beloved.” Among other things, I found a file named BELOVED3.DOC, which showed a variation on the book’s famous last lines not otherwise represented in the other draft materials. She wrestled with those final lines of the novel for a long time, until the very last minute. It felt very meaningful to me to see into Morrison's creative process like that and look over her shoulder, if you will.

How does your work at BookLab relate to the book?
I’m a professor interested in the cutting edge but I also enjoy old books and metal type and getting my hands inky. Because to me it’s all the same thing. Whether it’s computer code or metal type, it's still a process. You’re still doing something with your hands, you're still making something. I want to understand how books are being made and manufactured in 2021 and be able to apply the same sort of rigor we are used to applying to understanding the makings of physical things to digital objects.

The Department of English will host a virtual book launch for “Bitstreams” on Wednesday, Oct. 20, from noon-1 p.m. Register here.