2019 State of the College Address

October 02, 2019 College of Arts and Humanities 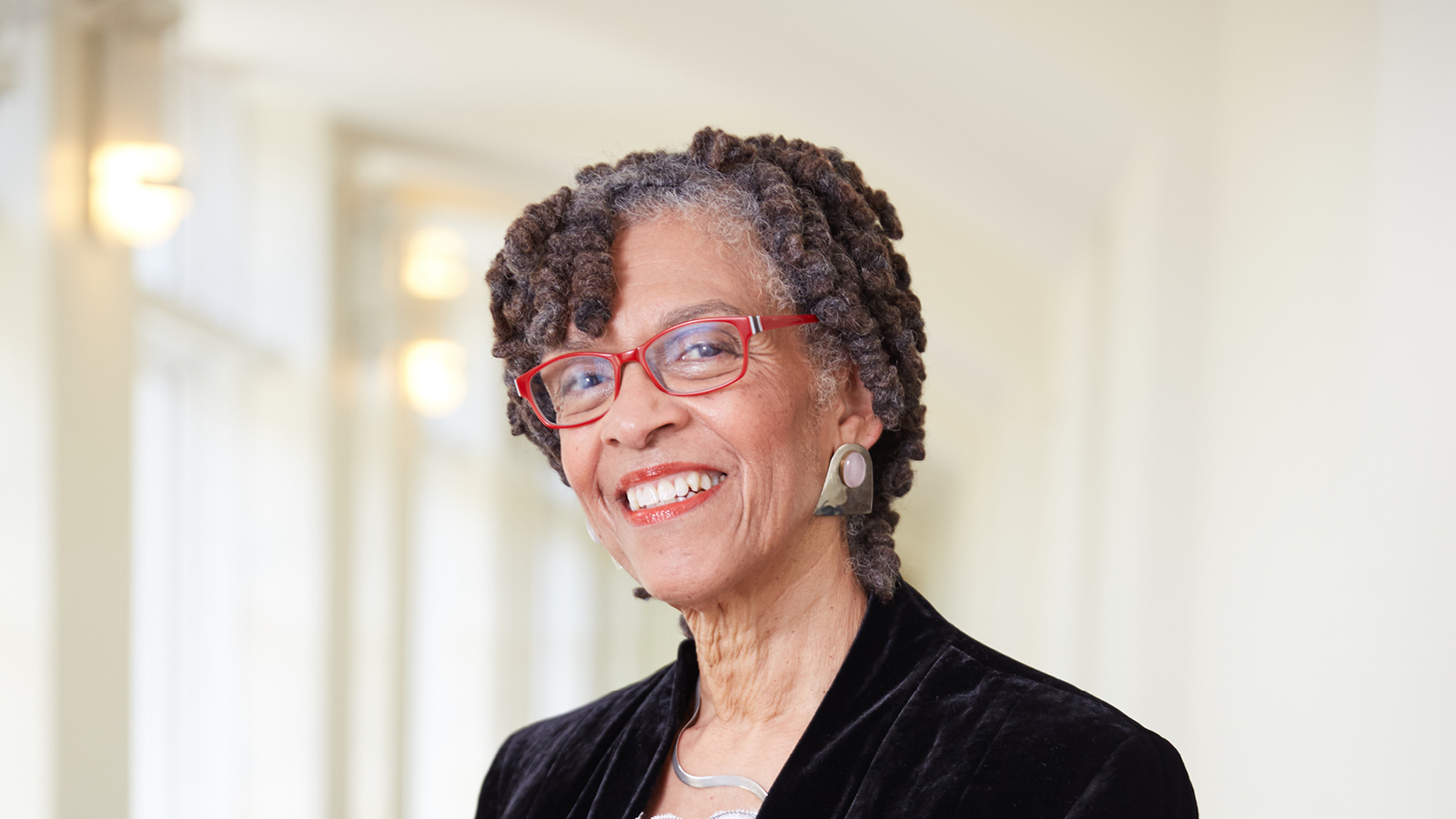 Remarks by Dean Bonnie Thornton Dill to students, faculty and staff at the college’s annual convocation.

The Dean: Good Afternoon. I want to begin by thanking all of the people who’ve made today’s program possible: the Schools of Music and of Theatre, Dance, and Performance Studies; the staff of The Clarice; and the people in my office —especially my assistant Chant’e Ingram, and Nicky Everette and her staff. 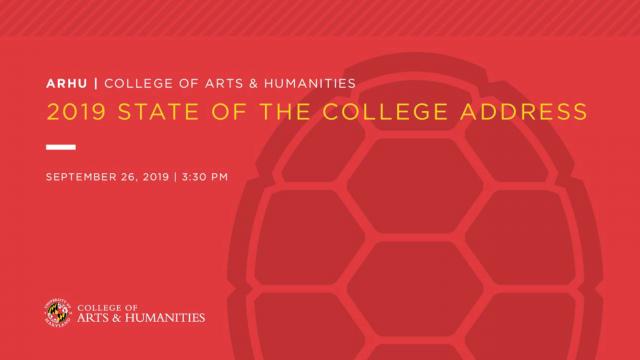 Recently, I heard a reference to the work of Peter Block, author of “Community: The Structure of Belonging.”  In that book, Block says: “Each gathering needs to become an example of the future we want to create.”

Every fall, we gather to celebrate the accomplishments of the past year: the award-winning scholarship and path-breaking creative endeavors of our faculty and students and the ingenuity and dedication of our staff. We welcome newcomers and returnees to re-energize our shared commitment to teaching, research and service for a future that is always changing.

INTRODUCTION: WHAT’S PHILANTHROPY GOT TO DO WITH IT?

This year, we’ve chosen to highlight philanthropy. If you’re thinking: “What’s philanthropy got to do with it?” The answer is: a lot. 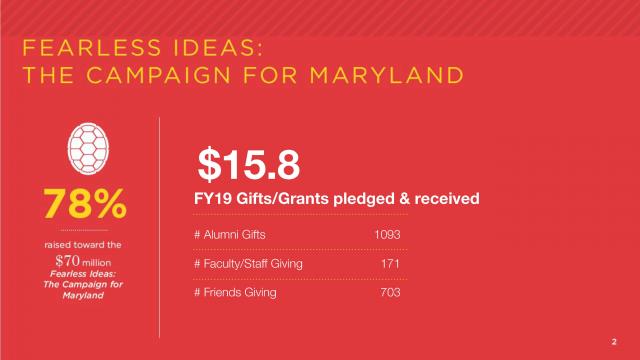 Three years ago the college identified four strategic priorities, and since then I’ve used this address as a way of updating you on our progress. Today, I’ll discuss aspects of the first three goals. The 2018-19 “Year in Review,” available here, provides many more examples. 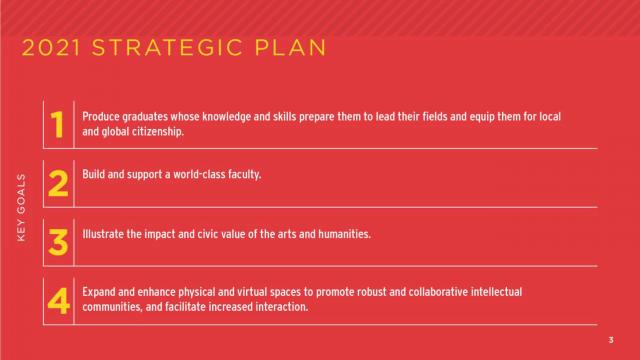 First-year undergraduates in the class of 2023 are exceptionally talented. Some of them have joined us today as part of the ARHU 158 course. Each year we also welcome a number of transfer students who have worked hard at other institutions and are continuing their studies at Maryland. Finally, our departments have actively recruited some of the best graduate students in the country. As a group, you have fearlessly chosen to study what you love. We’re glad you’re here.

I introduced curriculum-career integration last year, but this year we’re launching all of the activities in an initiative titled: “Be Worldwise. Get Worldready.” Through purposeful career preparation, professional pathways and regional and alumni partnerships, students are encouraged to connect curriculum, career and community in ways that help them develop skills and knowledge that provide a sound basis for their future. An example is Kian Kelley-Chung. 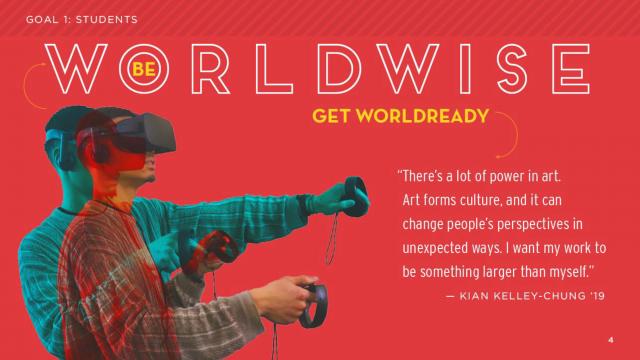 A senior majoring in English, Kian is at the forefront of the department’s new media studies track, learning what it takes to create dynamic content for a range of emerging technology. To prepare, he’s exploring and developing a nuanced appreciation for storytelling through courses in creative writing and film. He’s collaborating with a filmmaker in Baltimore to create “HUMANO,” a fictional VR story that immerses viewers in the experience of migrating from El Salvador to the U.S. After two research trips to Mexico and El Salvador, Kian is using notes from interviews with migrants at different stages of the journey to write the script. This is one of several projects he has underway, all of which began in a classroom. You can learn more about Kian on the ARHU website.

English’s media studies track is an example of how ARHU departments are redesigning academic programs to connect foundational knowledge with professional preparation. Over the past year, and under the leadership of Assistant Dean Audran Downing, we established a career advisory board and hosted strategic planning sessions with departments.This year we’re launching new Professional Pathways including: 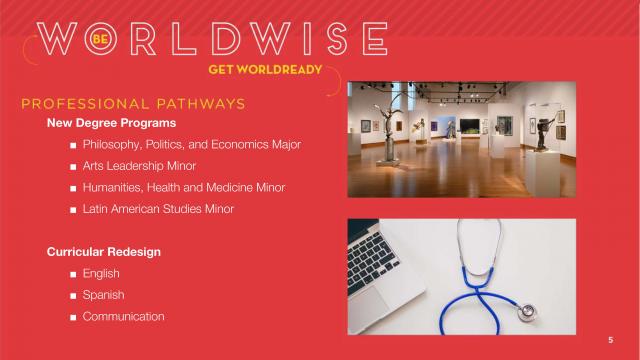 These pathways are supported by Purposeful Career Preparation, which includes personalized advising and programming provided in part by UCC@ ARHU, a collaboration between the University Career Center and ARHU’s Office of Student Affairs. 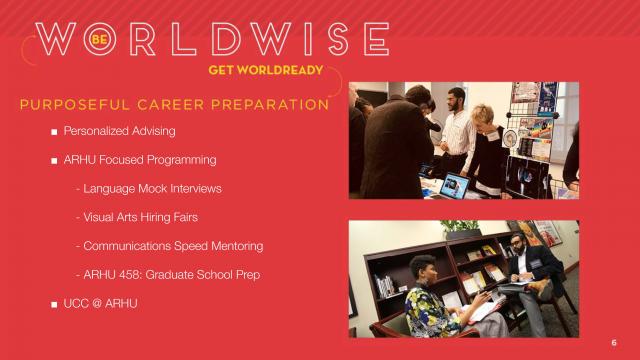 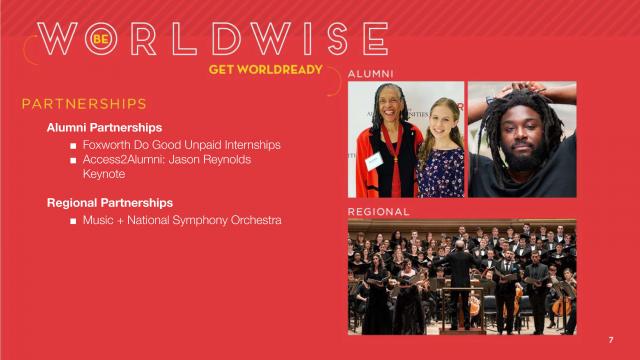 Drawing on the rich resources of Washington, D.C. and the State of Maryland, we’ve developed exceptional partnerships. Last May, the School of Music’s concert choir performed with the National Symphony Orchestra at Carnegie Hall, the result of a longstanding collaboration.

Our students also continue to win a notable number of national scholarships and awards: ln FY19 ARHU students won 59 national scholarships. We compete successfully for these awards in part because of our emphasis on language learning and our outstanding Arabic and Persian Flagship Programs. 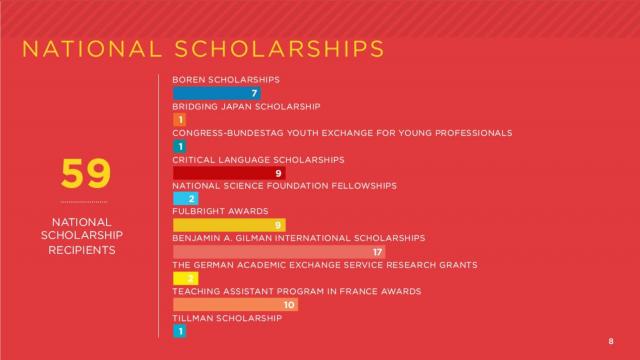 Thanks to the College of Arts and Humanities, Maryland has again received national recognition for diversity. The publication  Diverse Issues in Higher Education named us among the top five universities conferring African American students bachelor’s degrees in area, ethnic, cultural, gender and group studies, and foreign languages, literatures and linguistics. We were also named among the top five for awarding doctorates to Asian American students in visual and performing arts.

Building and supporting a world-class faculty is essential to prepare students to “Be Worldwise and Get Worldready.” Almost 600 tenure and professional track faculty in ARHU are engaged in a broad range of innovative scholarship that bring distinction to the campus and gives students opportunities to work with faculty in the creation of new knowledge. As the American Academy of Arts and Sciences argues: “Scholarly research is an important—perhaps the most important—part of the humanities infrastructure not only because it is critical to the vitality of this field in both educational settings and society at large, but also because scholarship in specific humanities disciplines can have significant bearing on national and international issues.” — Humanities Indicators

For example, Robyn Muncy, historian and expert on 20th century progressive social movements, co-curated the “Rightfully Hers: American Women and the Vote” exhibition currently on display at the National Archives Museum. The exhibit marks the 100th anniversary of the 19th Amendment, which gave women the right to vote—or did it? Professor Muncy’s research helps visitors recognize that the fight for voting rights has been uneven with the skirmishes of the past informing the struggles for voting rights today. 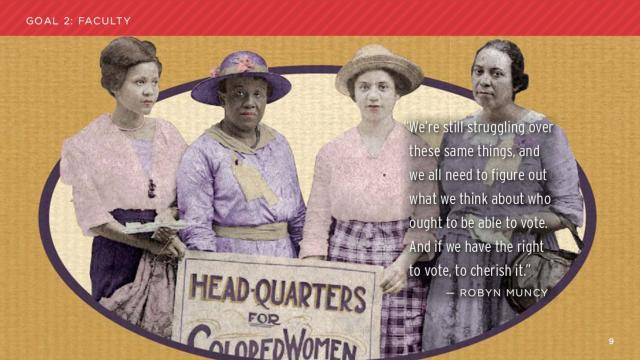 Maintain and Strengthen Excellence in Research, Scholarship and Artistic Creativity

One indicator of the strength of the research infrastructure in ARHU are five active Mellon Foundation grants, led or co-led by ARHU faculty. 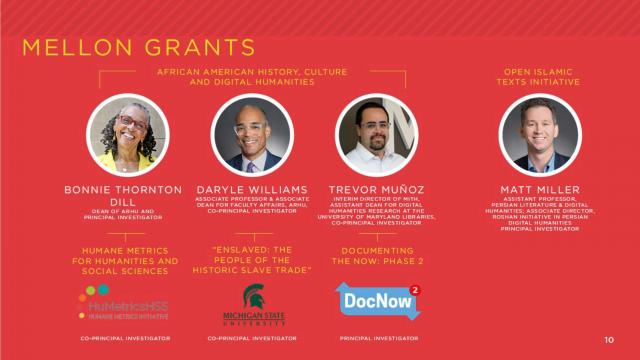 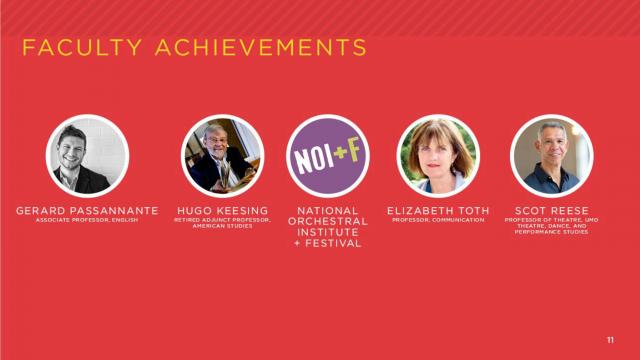 The accomplishments of our current faculty stand upon a foundation of excellence established by our predecessors. Three pioneering faculty are being memorialized on campus this fall. 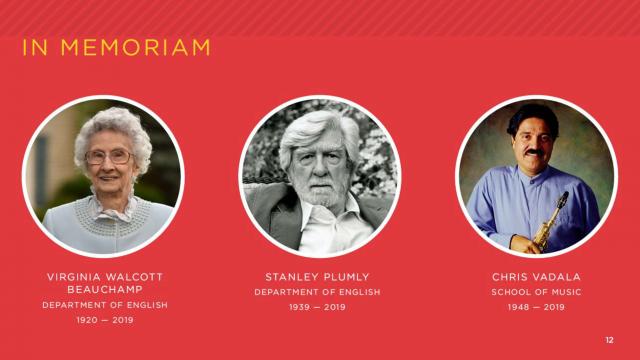 Telling our stories, making our accomplishments and their impact visible is our third strategic goal.

Last year we launched the college’s new website and produced a series of compelling feature stories that distill arts and humanities research for public audiences. This year we’re extending this technology, and our storytelling, to academic units through a phased website deployment process. If you visited the ARHU site or read Maryland Today, you learned about Cy Keener, assistant professor of art. 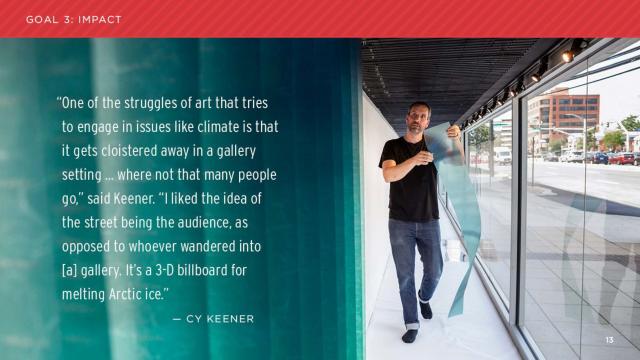 Professor Keener, a trained artist and architect, is interested in how technology, art and the environment intersect. He recently installed his work tracking Arctic ice melt at the VisArts gallery in Rockville, Maryland. This installation was a product of his Alaskan expedition to visually document the thinning ice through sensors tracking its thickness daily. He transformed the data into an art installation, hanging strips of 6-foot-long, blue-green polyester film to reflect ice depth.

Demonstrate the Value of Impact of Arts and Humanities Research

ARHU’s range of research, scholarship and creative works is setting the agenda for transformative dialogues about the impact of the arts and humanities in the world.

For example, Linda Aldoory has a subcontract with the CDC and the Prince George’s County Health Department to develop and implement health messaging for underserved communities; Clare Lyons has an NEH fellowship for a book that examines changing ideas about sexuality and gender in the 1900’s English-speaking world; In Damien Pfister's “Interpreting Strategic Discourse” class, students coded and created a database of approximately 3,000 Facebook ads planted by the Russian Internet Research Agency. And, Jessica Enoch received a 2019 Elevate Fellowship to redesign English 101 to better explore issues of diversity, inclusion, community outreach and social justice. 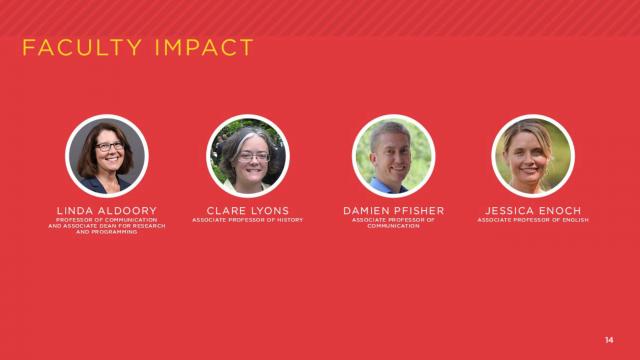 As part of the campus’s Civic Maryland initiative, the Arts and Humanities Dean’s Lecture Series will present Cecile Richards, former president of Planned Parenthood and co-founder of Supermajority, on December 5. 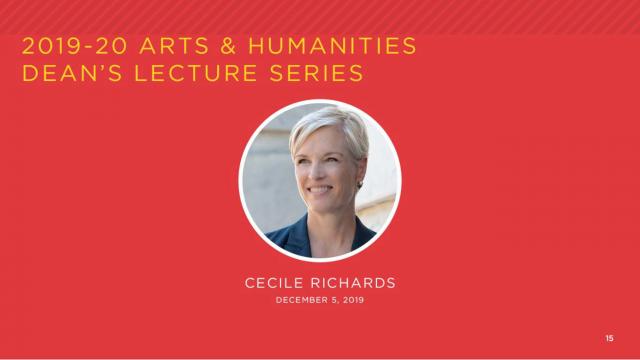 Partnerships and collaborations expand scholarship and innovation in the arts and humanities. 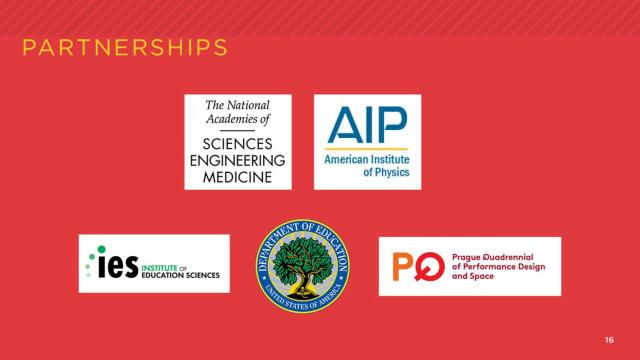 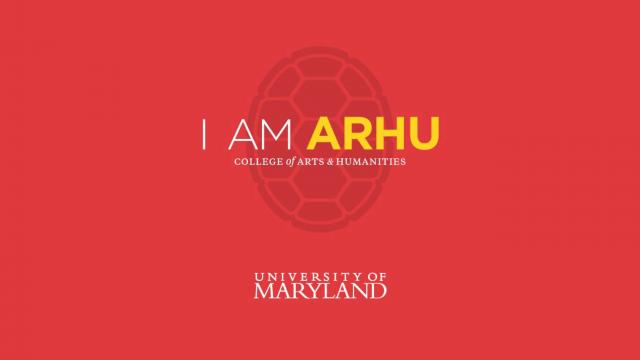 So, what does philanthropy have to do with it? During my tenure as dean, I’ve learned that philanthropy is about collaborating to deliver on the promise of an arts and humanities education that inspires the imagination, creates dynamic new intersections with other fields and establishes the University of Maryland as a cultural leader. And that’s a lot!

Thank you all for coming out today.  We will close with the sounds of Chris Vadala.