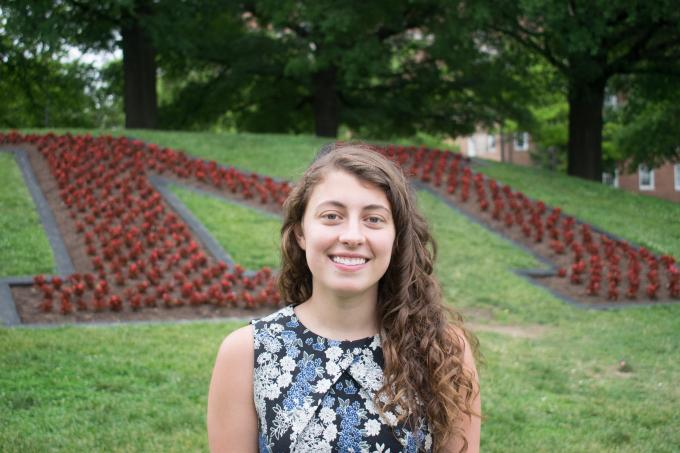 Congratulations to the eight UMD students who were awarded the Boren Scholarship.

Among the eight Boren recipients for the 2018 season, five are majoring, minoring or have a second major in the School of Languages, Literatures, and Cultures (SLLC) in the College of Arts and Humanities (ARHU). Four are studying in the Arabic Flagship Program.

The Boren Scholarship is a Department of Defense award that provides up to $20,000 for long-term (two semesters or longer), language-focused study abroad. The program is funded by the National Security Education Program (NSEP) and allows students to study abroad in areas of the world that are critical to U.S. interests and underrepresented in study abroad, including Africa, Asia, Central and Eastern Europe, Eurasia, Latin America and the Middle East. The program targets applicants with a strong interest in using their skills for government service.

Sofia Alsamadi is a senior studying government and politics with minors in Arabic studies and international development and conflict management. She will study Arabic in Amman, Jordan. She has been a resident assistant in the Language House Living and Learning Program for the past three years, two of those years serving in the Arabic Cluster. Alsamadi is an alumna of the College Park Scholars International Studies program and the Global Fellows program. In addition to her own Arabic studies, Alsamadi will volunteer with a local humanitarian nongovernmental organization to teach English to Syrian refugees. She will leave for Jordan this September and return in June 2019. Upon return she will work for the federal government pertaining to international relations and diplomacy.

Zachary Goldblatt is a government and politics and Arabic studies double major and global terrorism minor who will study Arabic in Meknes, Morocco. He is a member of the Arabic Flagship Program and the Language House Living and Learning Program (Arabic cluster), and is an alumnus of the Global Communities program. He has participated in the Global Fellows program and has held internships with Department of Homeland Security (U.S. Citizenship and Immigration Services), the Department of State (Bureau of Near Eastern Affairs, Office of Press and Public Diplomacy) and with National Consortium for the Study of Terrorism and Responses to Terrorism (START). Goldblatt has also held roles as president and treasurer of J Street U.

Joshua Silverman is a Arabic studies and government and politics double major who will study Arabic in Meknes, Morocco. He is a member of Arabic Flagship Program and has participated in the Global Fellows program. Silverman has held internships with the Federal Policy Office of the Jewish Federation of Metropolitan Chicago and with Maryland's Center for the Advanced Study of Language. Silverman has also served as an Alternative Spring Break leader. Silverman is excited to develop his Arabic language skills and cultural literacy.

Matthew Wheeler is a Arabic studies and French studies double major and military studies minor who will study Arabic in Meknes, Morocco. He is cadet commander of the university's Army Reserve Officers' Training Corps (ROTC) Battalion and is a member of the Arabic Flagship program. Wheeler has participated in the Army ROTC Cultural Understanding and Leadership program in Morocco and serves as a research assistant for the Revolution in Military Professionalism project at the university. Wheeler has held internships with State Department (Office of Arabian Peninsular Affairs) and the Washington Institute for Near East Policy.

Ari Rickman is a double major in history and government and politics with a minor in international development and conflict management. He will study Portuguese in Maputo, Mozambique. Rickman is an alumnus of the College Park Scholars International Studies program. He has held internships with the Center for International Policy in the office of Rep. Alan Lowenthal, D-Calif., the Citizen’s Climate Lobby and Mujeres 2000, an nongovernmental organization based in Buenos Aires, Argentina while studying abroad in Argentina. Rickman is also director of outreach for J Street U.

While in Maputo, Mozambique to study Portuguese, Rickman plans to also study electoral reform in emerging democracies. He hopes to find an internship with an nongovernmental organization working on democratic reform. He would like to travel around Mozambique and hopefully visit South Africa and Swaziland as well.

Samuel Koralnik is a government and politics major and global terrorism minor who will study Indonesian in Malang, Indonesia. He has participated in the Global Fellows Program, and has held Internships with START and Search for Common Ground. Koralnik conducted research with Steven Weine at University of Illinois at Chicago, and worked as a research fellow with START. He served as a project leader for the Risk Communication and Resilience Stream of First-Year Innovation (FIRE); and student government legislator for the South Campus Commons community.

Griffin Riddler is a government and politics and economics double major who will study Chinese in Beijing, China. Riddler is an alumnus of the Honors Humanities program in the Honors College and has participated in the Global Fellows program. He has held internships with the office of Rep. Ray Lujan, D-N.M., with the National Defense University and the Maryland State Department of Education. Griffin is president of the Maryland Shakespeare Players.

Bronwen Schriml is a government and politics and geography double major who will study French and Wolof in Dakar, Senegal. She is an alumna of the Honors Humanities program in the Honors College. Schriml participated in the Global Fellows program, and has held internships with the International Trade Commission, the Department of Homeland Security, the Department of State (International Organizations Affairs Bureau), and the Embassy of Canada. She also studied abroad in Paris, France.